Here’s the second in your up close and personal time with MatadorU faculty. Kate works with photographers on, in her own words: “That they – at least the photo students – can look at their image and say, ‘I fu**ing made that. This was a result of my brain and I used my camera to make it happen.’”

1. When and how were you first drawn to create?

As a child. I grew up in a pretty creative household; my dad worked in the music industry, my mom had a dark room in the basement, and my grandmother had been a professional painter. I was drawn to preformance from an early age and did lots of acting – a sort of creation. I did drama all through high school, improv as well. My grade 12 year I was doing 6 hours a week in a special theater class worth double credits (for double time). Somewhere around Grade 10 I discovered I really loved poetry so I wrote a lot of bad poetry. Really, really bad. But I read good poetry. This was the door that drew me into writing. The urge to communicate, to express. Writing came pretty naturally, and soon I was addicted to it. I ended up at the Creative Writing program at my University, majoring in Non-Fiction (and minoring in Poetry). I really wanted to be a journalist. It was some more years before photography came into play.

2. Did you have a mentor? If so, who was/were that person/persons and how did they help you grow?

I had some fabulous drama teachers too that just encouraged me to express and explore without fear. It was the lack of fear to try new weird things that helped me grow, rather than just stick to what felt safe. I became a young person who felt comfortable in this regard, and I think that played into a lot of my choices and victories.

Later, in university, I had a non-fiction professor who focused on a genre called Cultural Criticism. A fancy term for non-fiction creative writing – not mainstream journalism but storytelling. As a mentor, he called me out on a lot of my shit – bad metaphors, terrible syntax, sloppy grammar, to name a few – in a way that made me want to do better, not withdraw or be embarrassed. I was inspired by his passion for his own work and the messy art of finding the real story in something. I embraced that mess – gone was this idea that writing was getting from point A to B with ease (and that if it wasn’t easy it meant I wasn’t doing it well or right) and in came this idea that writing was exploring, just getting things on paper however sloppy and looking for clues as to what the real story is. This was the exploring in writing I’d first fallen in love with. As I wrapped up my degree, he noticed I had some skill in writing about music (indeed I was hoping to be a music journalist) and helped me secure a book deal to write a full-length biography on the Beatles.

Later when I discovered photography, I had the pleasure of having Colby Brown as a sort of mentor. Not necessarily hands on with my camera, but in the growth of my images, and especially in making a career out of it. I knew Colby in real life and it took time to get the courage to ask if he’d kind of take me on. The result of that conversation was the true start of The Giving Lens, the company we now run together. Along the way, Colby taught me a lot about the attitude it takes to hustle (with honesty and good intentions), to reach for what you want and believe you deserve it, to learn from failing and get back up again and again, and to really stand your ground for what you’re worth (we’re often our own enemies in this regard).

3. If you had fifteen minutes to write a piece, make a photo or video that you knew everyone in the world would receive and experience, what would be your theme?

We’re alive. We exist. We’re here. And every day this is true, we should be grateful. 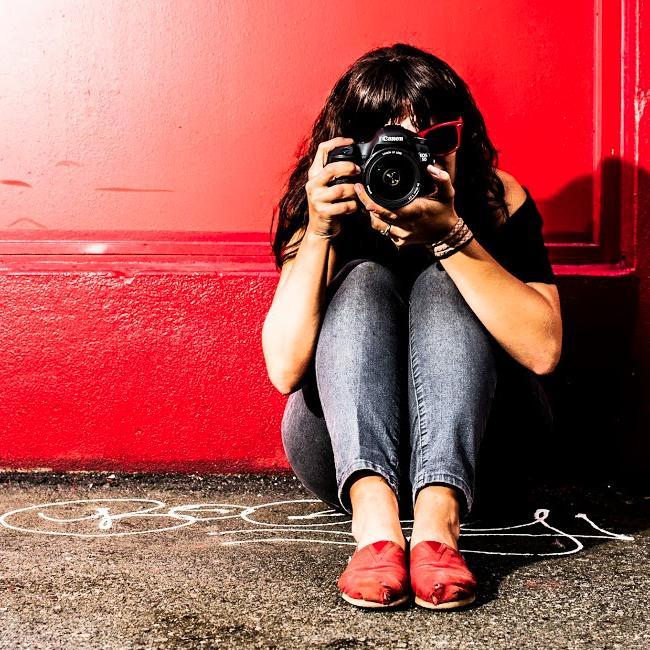 4. What is your favorite part of teaching for MatadorU?

Watching students really work out a concept or a technique, and come back so stoked that they did it. That they – at least the photo students – can look at their image and say, ‘I fu**ing made that. This was a result of my brain and I used my camera to make it happen. And I just love the atmosphere of being on the cusp of something big. What that means is different to different people – some have massive dreams and others just want a taste – but the sense of something coming, something on the horizon, it’s the same either way.

5. If you could sit face to face with a student for fifteen minutes, how would you want the conversation to go?

What are you doing, right now, to make it happen?

6. What are you creating now?

A baby. I’m due [real soon]. The anticipation is absolutely insane.

I’ve also been doing a lot of talks for Sony at photo conferences, and getting really good feedback on the content of them. This is making me think I have a few valuable things to say and I should maybe work on getting them into an eBook for people. Even if it were free, or $1, or $5, I think it would be really cool to create an eBook and have someone say it helped them. I know there’s a lot of good eBooks out there so I’m brainstorming what specifically I have to say that’s just a little different.

7. If and when you find yourself not able to create, how do you move yourself out of the blocked place?

Been there. After Uni, and after I finished the Beatles book, I realized that making a living as a writer is tough. It’s a competitive industry with a lot of rejection. When I had to get a day job to make ends meet, I found it harder and harder to make the time to write. I really believe to be a writer you need to be writing all the time – some say 20 minutes a day or 500 words a day or other methods. I couldn’t commit. And I felt like a failure.

Two things happened. I got married, and I got a new job. When I got married I realized, at some point, just how important photography was to me. Above all else I was obsessed with getting great images of our wedding. When it was all said and done, I thought “Huh. I really, really like photography.” Bare in mind this was pre-smart phones which I think has opened photography up a lot more to the masses to have that exact thought. OK, so I had this kind of moment so to speak, and then I got a new job which was 4 days a week, with fridays off. What would I do with this new day off? I didn’t want to waste it.

I felt a block with writing at this time. I’d been writing the Beatles book for a year and a half straight and it drained me (it wasn’t exactly the type of writing I loved to do, this made it harder). So when this spare day arose, I thought: I’m gonna learn photography. Boom. Done. YouTube tutorials, a DSLR, and a bunch of photography blogs later and I made a declaration. I am a photographer. I just started saying it, started believing it, began exploring again, and it was done.

Exploring by camera not only awoke my sense of creation again, my desire to explore and piece stories together, but it opened up a whole new journey and path I didn’t know was waiting for me. Five or so years later, here we are.

Within photography, when I feel stuck, I push myself to just keep trying something new. Night photography, long exposures, double exposures, borrowing or renting lenses I don’t know well, different times of day, different places, genres and subjects I don’t normally shoot. Joining photography clubs and being inspired by other creatives. Combining photo with video or sound or word. Just do something new, even if it flops, can jumpstart the creative drive.