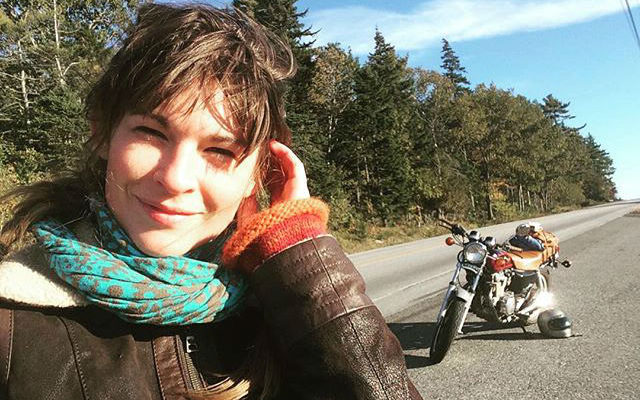 I first noticed Emma Thieme because of her clean and lyrical writing for Matador Network. Then I learned that she was – in many ways – a kindred spirit, delighted with what I treasure and bugged by what drives me to fury. This is her website, and this is Emma:

Mary: When and how were you first drawn to write?

Emma: Writing has been a constant in my life since childhood. I’ve always written in a journal and still try to do it every day. I think I’ve always been drawn to write because it’s something that comes naturally to me. I’m also more of an introvert so it’s easier for me to process my thoughts if I gather them on paper. As I grew older and writing became a larger part of my routine at school, I began to get recognized for it which told me that it was something I might have a talent for.

There was never any question that I would study writing in college. I went to school for journalism and never considered anything else. Now that I look back, I wish I had kept with creative writing as well because that’s what I was really on fire for in high school. And I think when you drift away from that form of writing — of creating your own characters and really trying to decipher how they think — it can be difficult to get back there. After I graduated, I moved to a new city and took an adult ed course in flash fiction. I was the youngest one in the course by several decades and it was very inspiring to be around other writers who had completely different stories to tell. We really bounced off of each other and that ignited something in me that had been stagnant for a while.

Did you have a mentor? If so, who was/were that person/persons and how did they help you grow?

I have never really been mentored through my writing. I honestly wasn’t a very involved student when I was in high school; I never met with teachers after class or tried to seek guidance. I’ve always been extremely independent when it comes to creating, possibly to a fault. When I look back, there was really just one teacher who I sought the opinion of and who really encouraged me to keep at it. I often think about how lucky I was that she reached out to me and am very grateful to her still. (Thank you, Mrs. Finland.)

When I think about a ‘mentor’ I actually think about a local clothing designer who I apprenticed under, Jesse Sader. Jesse really helped nurture me as a business woman and showed me that you can actually make a living doing what you love, but it’s going to be hard and you’re going to have to make sacrifices. I was lucky enough to be involved during a turning point in her own business when she was really starting to get the success that she deserved. And now, some years later, Jesse is still doing well and I run two businesses of my own, one as a freelance writer, and another as an upholsterer. I really have Jesse to thank for showing me that a creative life is possible if you work at it.

I like to think that this other facet of my creativity, sewing and working with my hands, spills into my writing as well.

I also can thank my late, great Aunt Mary for giving me the most important piece of advice I’ve ever received. She told me I was wasting my brain on restaurants.

If you had fifteen minutes to write a piece that you knew everyone in the world who could read, would read, what would you write about?

I would write an extremely depressing essay about climate change, technology, selfishness and what I envision the future looking like.

What is your favorite part of teaching for MU?

My favorite part about being a writing faculty member is reading everyone’s work. I am constantly inspired by the excitement new students feel and the commitment they make to their assignments. It helps me with my own writing and I also relate to it because I was once a MatadorU writing student too.

If you could sit face to face with a student for fifteen minutes, how would you want the conversation to go?

I would want to drop the teacher and student roles and just talk about interesting thoughts and ideas we’ve had — whether they have to do with writing or not. If you’re truly a writer, writing is just part of everything you think about, it’s not necessarily something that you have to acknowledge out loud.

I also have a difficult time calling myself a teacher. I think I just have a little bit of a knack for recognizing what’s not working in a piece of writing and suggesting how it could be better.

What are you writing now?

I have been working on what I guess you could call a “novel” for several years, but I really don’t want to call it that. Most of it is still in my head and the parts that are on paper aren’t in any particular order. I’m also the only person who knows what it’s about and I’m kind of determined to keep it that way for as long as I can. At this point, I’m just living my life alongside these fictional characters that I’ve created and trying to get to know them.

When I first started it was really just in an effort to get something done and out there before I turned 30. I do still have three years to go before I turn 30, but I had to let that pressure go because it was more about vanity and less about writing. I have a lot of things happening right now and a lot of life experience to gain, and personally, the best writing I’ve ever read definitely wasn’t written by anyone under 30.

I’m still working at it, though. And of course, I write in my journal every day.

If and when you find yourself not able to write, how do you move yourself away from the block?

I guess I would call myself an essayist above any other form of writing, so if I’m feeling blocked it’s usually because I’m feeling blocked in my own life. If I find myself with nothing to say, I usually just make a drastic life change without putting any thought into it beforehand. That often puts me in a place that’s at least interesting.