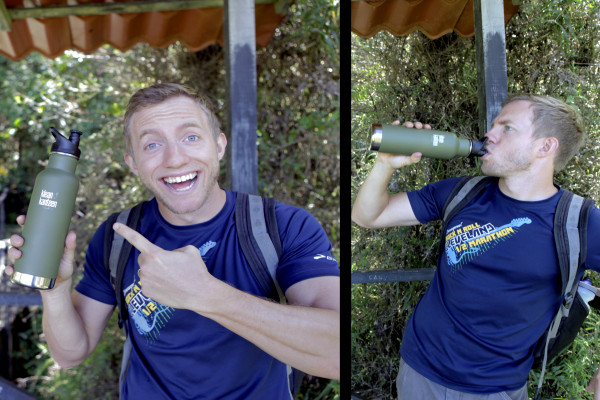 Klean Kanteen is in the business of preventing waste by encouraging water drinkers (i.e., the world) to #BringYourOwn. The campaign hinges on some dismal facts regarding American waste, such as Americans using 58 billion paper cups each year (182 cups per person).

With that in mind, Klean Kanteen sent one woman out to five fastfood restaurants with her own cup to see if they would fill that up instead of giving her their own paper cup. Some said yes and some said no, citing health codes, which is a tad confusing. Perhaps they caught Sean Hannity’s latest feature on re-used cups being laced with ebolathrax (a deadly ebola-anthrax cocktail). But trust me, they’re fine! I tried one out myself while hiking Costa Rica’s Volcán Barva.

After just one sip, I was able to fly to the top of the crater, battle a jaguar along the trail, and cure world hunger. Okay, that might be a bit of an exaggeration, but the larger point still stands. Stop being wasteful! Besides, I’ve always found water and other beverages have a bit of a funky taste out of paper cups. I’ll stick to my Klean Kanteen, thank you.

In all seriousness, the double-walled construction with high performance vacuum insulation kept my iced water cold and was a treat compared to the typical plastic bottle. The 100 percent stainless interior makes me more confident that I won’t be drinking anything fishy over time as the bottle experiences wear and tear. Best of all, there is no BPA or other toxins used in the makeup of the bottle. For $33.95, it strikes me as a modest investment in a product that should outlast your hiking days.

Klean Kanteen sent me this complimentary bottle for review. As always, all opinions are my own.