Photography faculty member Kate Siobhan talks about her challenges in obtaining one of her favourites of the trip.

I was in the small holy town of Pushkar, in Rajasthan, India, for the annual camel festival. For the experience, it was thrilling: Tens of thousands of camels descend on the town for trading, bartering, and shows, and along with them, tens of thousands of tourists, both from India and from abroad. For the photography, not so great.

Each morning there was practically a photographer for every camel out there – some with assistants; the open bartering field was swarmed by beige canon lenses and cargo vests. On top of this, composing in the field was hard; as it turns out, camels don’t like to pose much. They would turn away from me, come towards me, or even try to bite. Many hundreds of frames had gaggles of legs and tails, half heads, severed arms of herders reaching to adjust ropes, and other photographers walking through the frame. It was … crowded.

Come 9am, or, god-forbid, the afternoon, it was even more crowded with not only photographers but thousands of tourists, the heat of the day took over, and the shadows became too severe. So, how to translate the wonderful positive feelings I had about the festival into an image, when the conditions were actually quite harsh and unforgiving?

In the case of this image – one of my favourites from the entire trip – I returned at sundown, to start. The heat had subsided and most of the tourists were now gorging on palak paneer and chugging lassis after a long day – including many of the photographers. The downside, at first, was that many camels were gone or leaving as lots of the herders stay up in the hills for the night, so getting that shot of 50,000 camels in one frame wasn’t possible. But it was actually the herders heading out to camp that I found most mesmerizing.

Because of the dust the camels were kicking up as they left, the sunset because hazy and pink, which I adored – so I knew I wanted a silhouette so that I could expose all the colours in the sky. To get this shot, I climbed up a hill, and got close and low, so that the legs of the camels wouldn’t look cut off, knowing that I would be going for a silhouette. I exposed for the sky, focused on the camels, and fired away. For my settings, I decided I wanted some to try for some flare off of the sun (a sun burst) so I went high, f/22, and to keep my shutter speed high, since the animals were moving, I increased the ISO to 1000. This gave me a shutter speed of 1/500.

I didn’t really get the sun burst I was hoping for – it needed to be timed perfectly with the camel’s legs – but I still enjoy the shot regardless, though it could have been done at f/11, and no ISO. The colours, the simplicity, the obvious silhouette of a camel, the herder with his stick, the dusky colours, the journey home – it summed up how I felt in the moment. And what more can you ask for than that, really? 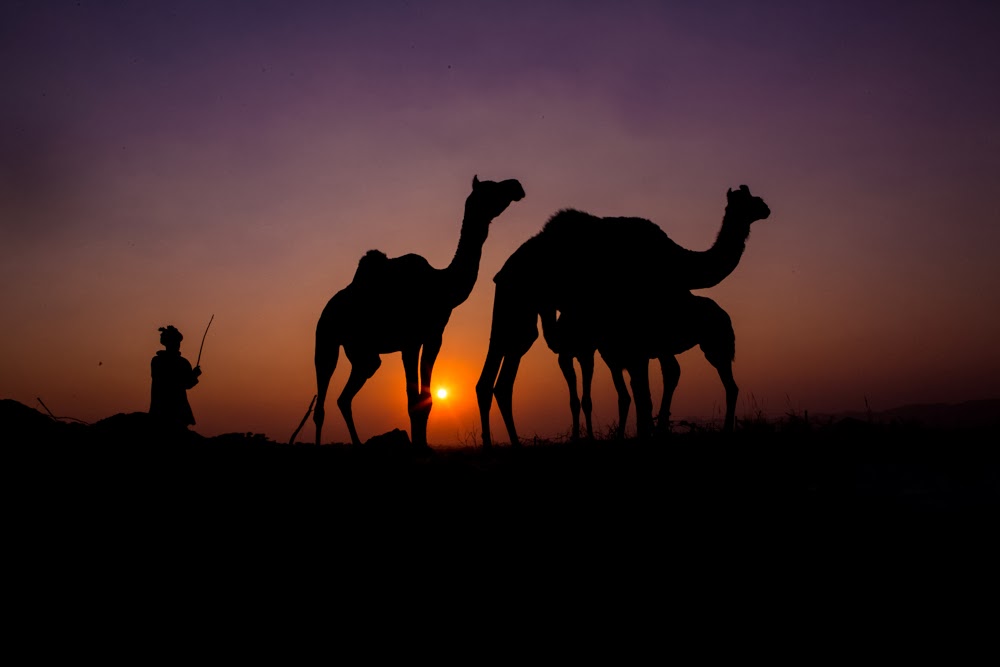 Behind the image: Palawan sunrise
Get your mojo working: Finding your lost writing
Digital darkroom tips: Creating realistic eyes
Why do we write?
5 simple ways into a travel editor’s heart (and publication!)
How I got that shot: MatadorU student Andrew McConachy