Chapter One: A Brooklynite's Tale 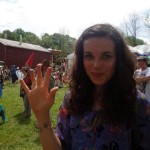 Before Brooklyn slips through the synapses of my mind, I want to document my version of its storied existence. The so-called land of hipsters has been a vital part of New York centuries before brunch was in, before Bedford Avenue became populated by the (ahem) effortlessly trendy, before it became gauche to appear too interested in just about anything.

Brooklyn became a part of greater New York City in 1898, when the boroughs married and merged and the Big Apple became the second biggest city in the world, after London, over night. Before then, it was Manhattan’s rival—and continues its steady rule as the real epicenter of cool to this day. Brooklyn’s charm lies in its ongoing mystique. While every square inch of the isle to the west has been explored and venture-capitaized Brooklyn remains a relative mystery. It’s safer than the Bronx, more accessible than Queens, and I won’t even get into Staten Island.

It’s hard to put a finger on what has caused the renaissance that spurred BK to become the destination for the open-minded flock. Maybe it was Jay-Z, who grew up in the Marcy Projects a block from my brother used to live in Bed-Stuy. Or the fact that the area’s current hasidic Jewish population offers a portrait of New York at its prime: clear cultural juxtapositions that don’t quite mesh, yet are able to highlight the other’s traits in such a way that sweeping generalizations of any neighborhood as more than cliche, they’re a falsity.

It wouldn’t do Brooklyn justice to compare it to Manhattan. They’re limbs of the same animal, and New York City wouldn’t be complete, or as agile, if it weren’t for their differences. The parts indeed complete the whole. While Manhattan glitters in her over-priced designer frock, Brooklyn rolls her own cigarette and smokes it on the way to a rooftop. It’s gentrifying—for sure—but at a pace that isn’t completely uprooting the past. Rather, it puts on Grimes, and asks the locals to dance while offering a cup of fair-trade coffee brewed by a freelancer at a scene cafe  that echoes la vie bohème of Parisian predecessors.

While in New York, I made my home in Greenpoint. A serendipitous sequence of events led me, a first generation Polish immigrant, to the claimed neighborhood by my distant kin may be chalked up to coincidence, but that’s for you to decide. Personally, I believe that everything happens for a reason, and that the Universe has an excellent sense of humor.

Indeed, it was fascinating to watch the home country’s habits integrate into American norms—even better to observe stare-down stances. Case in point: the languorous drunken men who would make themselves completely comfortable on park benches…much like in Poland, the beer buzzed have a deep affinity for the outdoors. Or how my roommate, Thea, pointed out that almost every corner shop has vodka chilled and ready to go at a moment’s notice. But don’t let me color your lens of Polish culture too much. Sure, we like to sample the hoppy brew some time to time, but I don’t think it’s an accident that Greenpoint was also the safest neighborhood in all of Brooklyn—the values of home and church carried over from the old continent, even with a drink in hand.

Before leaving, I wondered what Greenpoint would be ten years from now. Williamsburg, the burgeoning hub of the aforementioned hipsters, is down the block and rapidly spilling over. Rents are rising. Homegrown Poles are moving to Ridgewood. The median age is dropping every year. Is this a bad thing? Maybe. But New York wouldn’t be what it is today without constant facelifts and those ambitious types who ride the trends to something culturally richer, more diverse, and perhaps above all: cooler.

Fuggetabout it.  Brooklyn is it.